[Free]Grand Battle v6.3.1 Released with a New Awesome Interface for 2014

Hi, guys. 2014 is coming and have you planned for it? Mongolee has also updated their great realistic MMO strategy game Grand Batter to v6.2.3 with a new awesome Interface. You will love it.

And also it has redesigned the user interface and add a new server. Also, all the four severs are now visible.

About Grand Battle
Grand Battle is a realistic MMO war game for Android that needs you to lead your army, tanks, and real battle forces to launch a bloody war against your enemy in the fierce battlefield.

Grand Battle enables you to experience lifelike scenes, realistic fierce historical battles and military weapons similar like Red Alert. With stunning graphics and well-thought gameplay, Grand Battle is a true military strategy war game you are dying to have your hands on. In Grand Battle MMO, the urge of getting revenge, the excitement of more power and the claim of glory. With a Build-Attack- Destroy model, you will be a true commander thriving your way towards victory in no time.

Hi,guys,Grand Battle has updated to 6.2.1 now and you need to update the version to enter the game normally.

This picture looks like a wallpaper from World of Tanks.
Is this game diffecult to play on a smartphone?
C


Sonar schrieb:
This picture looks like a wallpaper from World of Tanks.
Is this game diffecult to play on a smartphone?
Zum Vergrößern anklicken....

Hi, Sonar. This game is a simple Android war game, it is easy to start and if you install the game, there is a simple guide that will guide you quickly go into the game.
C 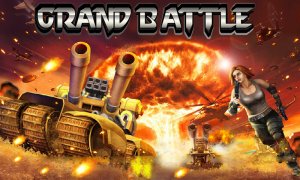